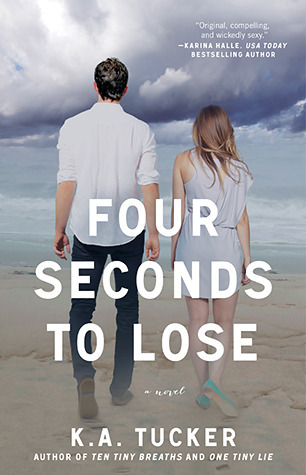 Synopsis : I believe you don’t have years, or months, or weeks to impact a person’s life. You have seconds. Seconds to win them over, and seconds to lose them.
Owning a strip club isn’t the fantasy most guys expect it to be. With long hours, a staff with enough issues to keep a psych ward in business, and the police regularly on his case, twenty-nine-year-old Cain is starting to second guess his unspoken mission to save the women he employs. And then blond, brown-eyed Charlie Rourke walks through his door, and things get really complicated. Cain abides by a strict « no sleeping with his staff » rule. But being around Charlie challenges Cain’s self-control… and it’s been a long time since any woman has done that.
Twenty-two-year-old Charlie Rourke needs a lot of money, really fast, in order to vanish before it’s too late. Taking her clothes off for men makes her stomach curl, but Charlie tells herself that at least she’s putting her acting and dancing skills to good use. And though her fellow dancers seem eager to nab their sexy, sophisticated, and genuinely caring boss, she’s not interested. After all, Charlie Rourke doesn’t really exist – and the girl pretending to be her can’t get distracted by romance.
Unfortunately, Charlie soon discovers that developing feelings for Cain is inevitable, and that those feelings may not be unrequited – but losing him when he finds out what she’s involved with will be more painful than any other sentence awaiting her.

Review : As you may already know, I really enjoyed reading the first two books of K. A. Tucker’s series, Ten Tiny Breaths and One Tiny Lie. I was curious to learn more about Kacey and Livie, the main characters of these stories. Unfortunately, we don’t follow them in this third novel, but Cain, the owner of the club where Kacey worked, and Charlie, a new character. At first, I have been a little bit disappointed by the two points of view in the plot. I highly prefer when we don’t know everything and discover what is going on at the very end of the book. Here, this is not the case, as lots of actions were predictable, beginning with the love story between Cain and Charly, which is announced in the synopsis. This is the same with the plot: Like in the first two books, this is a young girl who needs an older man to save her from serious issues like alcohol, drugs or abusive men. These themes give good plots, I have to admit, but at the end, the three novels seem to be built on the same basis and we already know the main lines even before starting them. I have to say that I have not been very convinced by the story. Moreover, I’m not sure this is really believable that each character in these books has a hard background and tries to deal with it by dancing or working in Cain’s club. Does it happen in real life? Honestly, I don’t know as I don’t frequent this kind of places, but it seems to be a little bit too much for one club.
However, I liked Charlie’s personality and this is why I continued this book until the last page. She is a strong and lovable woman, even if she doesn’t know it yet. Her past is complicated but she tries to deal with it, no matter what. This is a great lesson of strength and resilience. It makes up, in a way, the fact that the plot is not really positive for women conditions. Creating this kind of character and personality is important to spread a better message throughout the novel.
On the contrary, I had some difficulties to appreciate Cain. OK, this is a good man who helps his employees and friends, without asking something in exchange, but he earns money thanks to these friends being nude in front of men, he loves a girl who looks like another one he loved previously and he decides for her if she can dance or not in his club because he is jealous of the other men. He is introduced to readers as a hero, but in my opinion, he is a macho and, on some aspects, toxic.
To conclude, this was a good read but this is not my favorite from K. A. Tucker’s series. I hope the fourth and last one will be more like Ten Tiny Breaths and One Tiny Lie. I also hope that the plot won’t be on the same basis and will be about lighter themes.