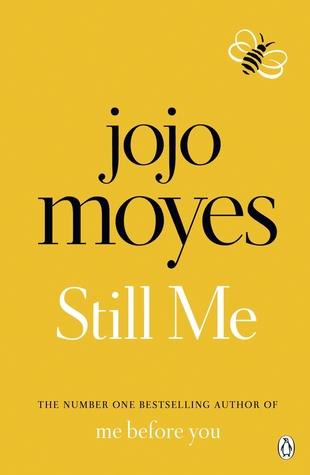 Synopsis : Lou Clark knows too many things… She knows how many miles lie between her new home in New York and her new boyfriend Sam in London. She knows her employer is a good man and she knows his wife is keeping a secret from him. What Lou doesn’t know is she’s about to meet someone who’s going to turn her whole life upside down. Because Josh will remind her so much of a man she used to know that it’ll hurt. Lou won’t know what to do next, but she knows that whatever she chooses is going to change everything.

Review : As you may know, I first read Me Before You and After You in 2017. As I really enjoyed these two books, I wanted to discover the last one of the trilogy, that is to say Still Me. To be honest, I was a little bit afraid I wouldn’t like it as much as I did for the previous ones because I wasn’t sure if this story needed another novel to conclude it. Moreover, I took a look at some reviews on Goodreads and readers either loved it or were disappointed about it. I decided to give it a try and kept in mind that my enthousiasm for Me Before You and After you wouldn’t be affected by Still Me if I didn’t really like it.
Hopefully, this book was a pretty good one. As in the previous novels, I found back Jojo Moyes’ humor and entertaining writing style. It’s pretty rare to be underlined, I laughed while I was reading Still Me. Louisa Clark is still this strong character with a singular and lovable personality. Even if she goes through hard times, she keeps her head high and goes ahead, no matter what. As it was already the case in Me Before You and After You, other people can be rude with Louisa Clark without thinking that she does her best to be kind and accomodating to everyone. She had lots of occasions to say ‘stop’ and live her own life, but she decided to remain the same and help the ones she loves or she thinks deserve her help. I really appreciated this point of the novel because it shows that there are people who are honest and truly want to be good to others, without expecting something in return. Louisa’s life wasn’t easy so far but she still sees the best in each situation and each person. We should all take her as a model to live in a better society.
Talking about the plot now. I have to say that several aspects of the story were too predictable. However, I took pleasure to discover Louisa’s daily life in New York. It was also good to have some news from the other characters, like Mrs Traynor, Lily, Treena or Louisa’s parents. I particularly liked reading some flashback letters from Will and meeting new characters, such as Mrs de Witt and Ashok. All of them play a role to make the reader comfortable, as if he took a part into the story and was himself a character.
If I had just two points to discuss, it would be the fact that I was too attached to Will to enjoy another love story for Louisa. I definitely think they were made for each other and it’s hard to imagine she can be happy with another man. The second point is about Agnes’ behavior. I thought she was a real friend for Louisa and it wasn’t the case. I would have appreciated at least some apologies from her.
To conclude, Jojo Moyes succeeded in writing a beautiful end for Louisa and Will’s story. I really enjoyed reading this book and following Louisa’s evolution. Even if this third book is not as strong and emotional as Me Before You, it is a good story to read.

Also by Jojo Moyes : Me Before You + After You